A new publication on the life of Lemon Hart, one of Cornish Jewry’s most famous ancestors who lived in Cornwall in the late 18th and early 19th centuries, has now been published by the Penlee Gallery and Museum Penzance. 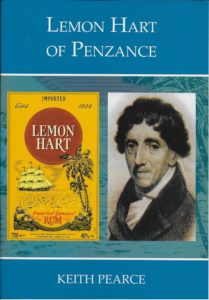 Written by local amateur historian, Keith Pearce, an expert on the history of Cornish Jewry, the biographical booklet contains much new information not previously published before on Lemon Hart and his family. Hart, most famous for his rum which still bears his name, has been the subject of much colourful mythology related to slave ownership, slave ships and plantations, and that he supplied the British \Naval ships with their ‘tot’ ofrum.  This publication  attempts to separate fact from fiction so that a more accurate picture of Hart can be established.

The booklet is available through Penlee House, local, national and online booksellers for £5.00.