One evening last week, an East Asian looking student was walking home from a gym in Sheffield when a man standing in a doorway shouted at her, “Chinese bitch!” In fact, she was not Chinese and had never been to China, not that this should have mattered. Further afield, in the central Poltava region of Ukraine, protestors attacked buses carrying evacuees from China to a spa in order to be quarantined. Meanwhile, Canadian Chinese and other South Asians have expressed fears of growing anti-Asian sentiments and prejudice among the wider Canadian community. The aggressors in all these cases have clearly not read or heard the Ten Commandments, which appeared (two weeks ago) in the parsha of Yitro, for does it not say, “Thou shalt not bear false witness against thy neighbour.”? Or perhaps they have read this commandment. Perhaps they have read and heard it many times, but somehow it passed over them, like water off a duck’s back.

The commandment is expanded upon in the following parsha of Mishpatim: “Thou shalt not utter a false report; put not thy hand with the wicked to be an unrighteous witness. Thou shalt not follow a multitude to do evil.” In the same parsha, we are told twice not to oppress the stranger in our midst, which is what the outraged inhabitant of Sheffield did and what some Canadians are believed to be starting to do. In the case of Ukraine, the victims were not even strangers, though perhaps for the inhabitants of Poltava, they had somehow become strangers by living in a land far away.

Mishpatim is, as its name suggests, a collection of commands to act for justice and to do righteousness. The sudden change of subject to a blueprint for the building of the Sanctuary in this week’s parsha of T’rumah might, therefore at first sight, seem odd. For God to dwell among us however, as He declares He intends to do, the place where He will dwell needs to be special. It needs to be fit for holiness, but how can a holy place be in our midst if we ourselves are not dedicated to holiness? Indeed, it will be the way we act and the things we do which will determine whether the place will be holy or not. Our behaviour becomes the space and one of the worst ways we can desecrate that space is to bear false witness, to search for and hurl our rage against those we blame for our misfortunes. Don’t we know it!

This Saturday we have a special treat, for the service will be led jointly by Rabbi Maurice Michaels from Bournemouth and Murray Brown, currently commuting between Cornwall and London to his new job. We would like to have a more special kiddish lunch than normal, partly in honour of our guest, partly because two of our members will be getting married on the Saturday evening, namely Rachel Brown and Roger Chatfield. Please try, therefore, to bring something good to share. 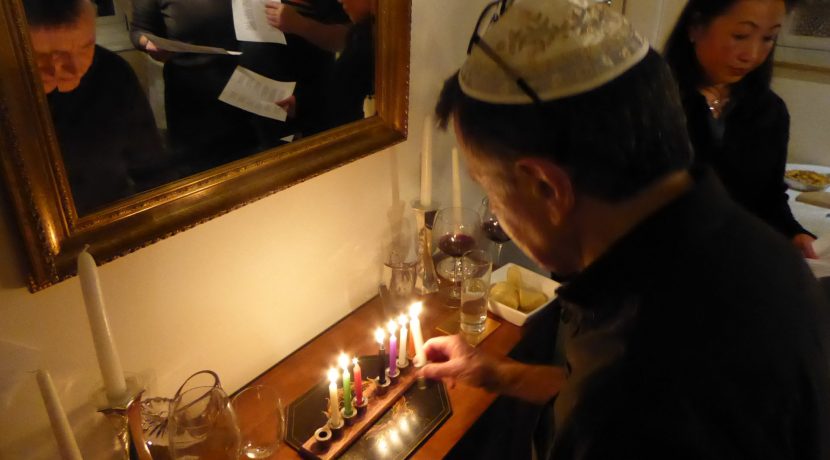 The KK community representing four generations came out in droves to welcome in the 7th night of Chanukkah at a party hosted in the home of Pat an Leslie Lipert.

Dreidls were spun. Chocolate gelt was equitably distributed among young and old. Churros and donuts, latkes and salmon, salads of every description and hot vegetarian dishes were prepared by members, not to mention a myrad of scrumptious desserts to complement this most happy celebration to commemorate the victories of the Macabbees when the light of the Ner Tamid burnt for a miraculous eight days. The service was led by Vice-chairman Adam Feldman as people lit their chanukkiahs to surround the reception areas with a blaze of light piercing through the darkness.

Following the service, a moving tribute, most thoughtfully and eloquently presented by Chairman Jeremy and Mai Jacobson, was made in honour of years of service to the community to Pat and Leslie Lipert. A rare, antique Yad of either Egyptan or Syrian origin was presented to the Liperts for communal use in our services along with an attached medallion honouring their contribution to the community.

The Liperts wish to thank all members of the community who made this loving presentation possible and will, like all present and future generations of Kehlllat Kernow, take special pride whenever this yad encircling our Torah is brought out for services.Todah rabah!

Photos of this event supplied can been seen clicking by here.

All the High Holy Day services were well attended this year at Roselidden Farm on the 8th and 9th of October with many visitors from afar and our own community of Kehillat Kernow.  Services were masterfully led by student rabbi, Eleanor Davis, and included on Yom Kippur afternoon, a special discussion of modern sins and their connection with the twenty-two sins cited throughout the service as part of the atonement liturgy in our machzors on this solemn holiday.

With Jeremy Jacobson’s reading of  the Jonah story in the afternoon  and the concluding Shofar blowing by Adam Feldman, the holiday concluded with Havdalah, and a breaking of the fast with a fine supper arranged by Peter and Jos Haddenfield of Roselidden Farm.

Special thanks to all those who contributed to making this a most meaningful observance and to Mai Jacobson, Rachel Brown and Leslie Lipert who took all the pictures.

PIctures of Kol Nidrei and Yom Kippur can be viewed by clicking onto the Photo Gallery above.

It may have been raining on Erev Rosh HaShannah and on the  day of 5780, but the sun certainly shone inside The Barn at Roselidden Farm in Helston when a large number of people from within the Cornish community  and from the greater community gathered together for services and delightful celebratory cuisine, both traditional and contemporary to observe the first part of the High Holy Days.

Led enthusiastically by KK’s  talented Adam Feldman, the service was warmly received and much appreciated.

The catering was done by Peter and Jos Hadfield while the traditional wine, whiskey, apples and honey, Challah and honey cakes were  contributed by members of the KK community.

Photos of this event supplied can been seen clicking by

The Fiction, Film, Food Event at Malpas Village Hall on the afternoon of 22nd September proved that both secular and religious rites of passage can somehow be managed with the showing of Sixty-Six for members of Kehillat Kernow and the greater community from the Cornwall Faith Forum. Add some popcorn, scones, brownies, and some Rosh HaShannah goodies, it was a fine combination of the best of British and the best of Jewish.

The funny and moving film told the story of a Jewish boy whose Bar Mitzvah was scheduled on the day of the famous 1966 World Cup at Wembley. Talk about a conflict of interests. A way around this tricky situation is happily resolved and offered much food for thoughtful and light-hearted  inter-faith conversation that belies the adage that sometimes, one can be all things to all people. Organised by Adam Feldman, this popular venue always promises to be of interest to a varied group of pictures.

Photos can be seen by clicking here.