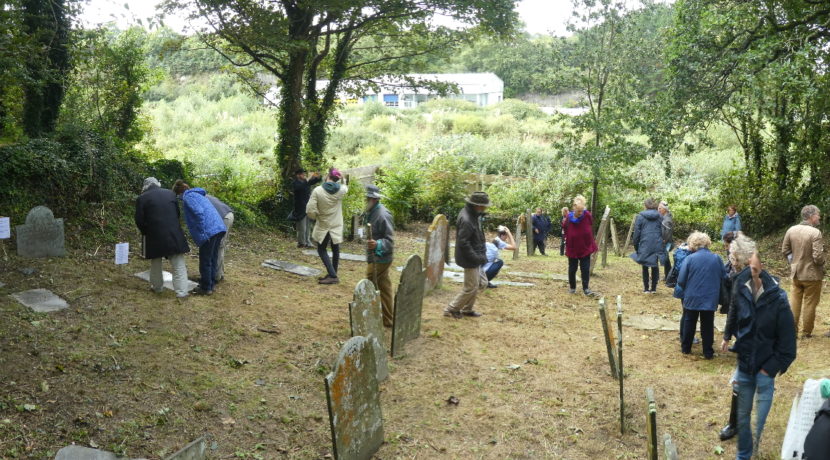 Well over two hundred people passed through the Dissenters and Jewish Cemeteries at Ponsharden in Falmouth on Sunday, the 10th of September to learn about their historic roots and the people who are buried there.

Sponsored by The Friends of Ponsharden Cemeteries, the event was held in conjunction with the European Days of Jewish Culture and Heritage and National Cemeteries Week. Restoration is currently underway led by The Friends, the Falmouth Town Council, and Historic England. An application to the Heritage Lottery Fund has been submitted to raise the necessary additional funds.

On hand to guide people through the site were Keith Pearce, local historian and authority on Cornish Jewry, Rob Nunn and Tom Weller, experts on the adjacent Dissenters’ Burial Ground, members of The Friends, and Anthony Fagin, custodian of the Jewish Cemetery. Headphones were provided which contained an audio trail to introduce people to the lives of some of those people buried there created by Ruth Mitchell and Derek Frood of the Ripple Theatre.

Of special interest, was a visit by Kathryn and Elliot Berman from Israel, to visit the graves of Kathryn’s ancestors. Kathryn is a 7th generation direct descendant of Esther Elias who died in 1780. Her burial with an unusual granite headstone is believed to be one of the oldest recorded Jewish burials in Cornwall. Also buried there are her husband, Barnet Levy, as well as some of their children and other members of that family. A special Kaddish was said for the Bermans as well as other memorial prayers.

(Photos of the event taken by Leslie Lipert and Anthony Fagin can be seen in the Photo Gallery by clicking here.)