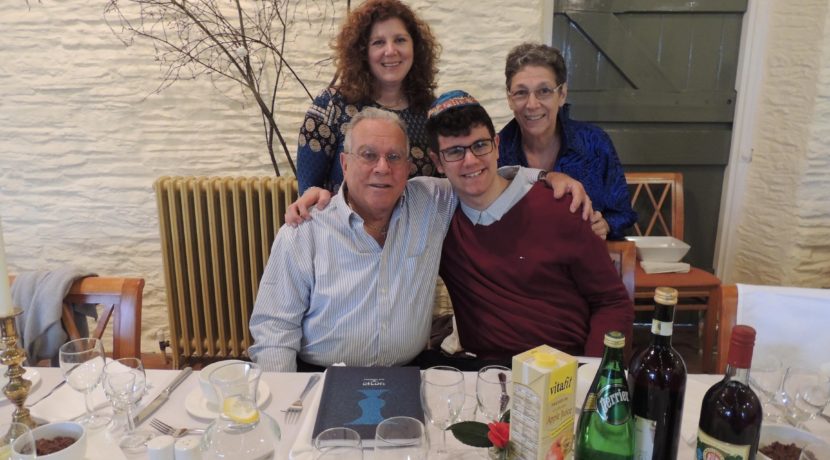 At the recent Seder, a good time was had by all, despite the absence of esteemed Newsletter Editor and stalwart Seder chef Pat Lipert, and Treasurer and general logistics wizard Leslie Lipert, who crossed the Atlantic to sample an American Pesach. The potential imbalance of populations was restored by the movement the other way of Rachel Brown’s parents   , who travelled from New York to Cornwall to spend Pesach with daughter and grandchildren.  Kehillat Kernow Chair Harvey Kurtzfield and Vice-Chair Adam Feldman led the service with great verve. The food was carefully and tastefully prepared by members of the community and the afikomen was found by Isaac Feldman, the last time he will qualify to take part in the search. Once again, we experienced the moving yet joyful story of the Exodus.

Last Saturday, being the first day of Pesach, the parsha was different from normal and we would have read of the Exodus and, interestingly, from Deuteronomy, of the danger of forgetting God in times of prosperity. Of course, this is the main reason why we celebrate Pesach: to remember, and there is so much to remember. “…the Lord brought us out of Egypt with a strong hand and a powerful arm, with overwhelming terror, and with miraculous signs and wonders.” We lived in tents, in the desert for forty years, agreed to accept the Covenant and gradually grew into a nation, ready to embark on a huge social experiment inspired by the word of God. We were slaves and we became free. In a way, we all repeat this journey in our own lives.

Now we return to the story in hand. Acharei Mot opens with God giving instructions to Moses for the sacrifices to be offered on Yom Kippur, one of which gives origin to the concept of the scapegoat. Ironically, the Jewish people themselves have often been made scapegoats for the misfortunes of the nations among whom they have lived. The parsha continues with the prohibition against eating blood. And then there are the sexual laws. I will say no more, but leave it to our service leader, who this week will be Liz Berg. Come along at 10.30 to hear her, to pray and to share the Sabbath with like-minded souls.

“On the eighth day, Moses summoned Aaron, his sons, and the elders of Israel.” That is what he does at the beginning of Shemini, which describes the sacrifices, so meticulously prescribed earlier, to inaugurate the Tabernacle. The whole community is there before God, watching, and all seems to be going well, until a terrible event occurs. Aaron’s sons, Nadav and Avihu, gripped by some overpowering enthusiam, rush to offer an unauthorised sacrifice, perhaps an ‘unholy’ sacrifice, and they are consumed by fire. I have read over the years quite a few texts justifying, or at least explaining, the sudden retribution that befalls them, but each time that we come to this episode, the same sense of shock is renewed. The shock is all the greater as, immediately after their deaths, Moses turns to Aaron and his two surviving sons and says, “Do not go without a haircut and do not tear your vestments…” How matter-of-fact, even banal, this sounds.  It turns out that Moses is not as insensitive as this make him sound. Later he excuses Aaron and his sons for not eating the sin offering as instructed, when Aaron reminds Moses of the tragedy that has befallen him and how wrong it seemed to him to eat on that day.

There follow the dietary laws, and so we come to Tazria, which opens with the law of circumcision. Rabbi Lord Sachs draws an interesting parallel between the day after the Creation, the day Adam and Eve left Eden (thought to be the day after Shabbat) the day of the inauguration of the Tabernacle and the day of the brit milah. In each case, it is the eighth day and in each case human beings assume the role of creators, in a sense taking over from God on earth. The main concern of Tazria are the laws relating to the ‘leprous curse’, though leprous is not to be understood as referring to the disease we now know as leprousy. M’tzora continues the theme with the purification of the ‘leper’ and goes on to deal with other forms of uncleanness. But I have written (more than) enough, and for prayers, insight and the shared experience of the community come along on Saturday at 10.30. Liz Berg will be leading us on this great Sabbath before Pesach.

…and He called to Moses, speaking to him from the Communion Tent. These are the words with which the parsha of Va-yikra launches Leviticus, the third book in our annual cycle. God instructs Moses in the intricate rituals of sacrifice. There are many kinds of offering, some freely made by any member of the community, peace and sin offerings, one for the High Priest, one for the King (though there is not yet a King to sin) those for the community and those for commoners. There are also offerings for unintentional sins, for misappropriation and for dishonesty. Some of the sacrifices allow people who cannot afford to bring an animal to substitute it with a pair of birds and, if they cannot afford these, they may bring wheat meal. There is a whole range of animals – kosher, of course –  doves and flour indicated for different purposes The manner of their preparation and sacrifice must have required much study and care on the part of the priests.

The laws relating to offerings continue in Tzav, whose commands cover what may be eaten of the sacrifices and how. It goes on to deal with the installation of the priests. That is all there is to be found in this announcement, but you may find out much more and share in the joy of Shabbat by coming to this week’s service, which will be held at 10.30. Adam Feldman will be leading us.

Earlier Moses received instructions on the making of the tabernacle, the ark, the altars, the lamp and other furniture and implements to be used both to host God’s presence and to serve for his worship. In Ya-yakhel, the construction of these things begins. We have become used to berating ourselves for our failings: the golden calf, our complaints and fears. Here, however, the people show the best within them. Moses ask for offerings of skins, wool, fine linen, gold, silver and precious stones with which to build and weave the furniture and furnishings. He asks for volunteers to craft and form everything as it should be, and he is overwhelmed by the contributions and by the volunteers. So much is given that the architects and builders have to ask the people to stop bringing more things. Sometimes one’s family can bring sorrow and pain, but here they bring joy.

And so we come to P’kudei, or the accounting, the making of the priestly vestments and the literal joining of the tribes of Israel to the High Priest by the names attached to his breastplate. Moses is pleased with all the work and everything is made ready. “God’s glory filled the Tabernacle” and the people are ready to move on, as move they must. Chazak, chazak, v’nitzchazeik.

To join the congregation in prayer and to gain insight into this week’s parsha, come along this Saturday at 10.30. David Jacobs, former Director for Synagogue Partnership for the Movement for Reform Judaism and now a Community Consultant, will be leading the service.