There are several parshiot about Abraham and about his grandson Jacob, but Isaac’s life is dealt with mainly in one, i.e. Tol’dot. Of course, he appears in the previous parsha of Chayay Sarah and in subesequent ones,  but it seems almost as a secondary character, someone to whom things happen, rather than as someone shaping his own fate. Even in Tol’dot, there are things done to him, while he remains rather helpless. Under Rebecca’s guidance, Jacob deceives him into thinking that he is Esau and so gains the blessing which was meant by his father for his older brother. Many years earlier, in Va-yeira, Issac took part in one of the most pivotal stories of the Torah, namely the Akidah, but again his is a passive, though potentially tragic, role. He is the victim, in no way the perpetrator.

Yet there is one episode, or narrative thread, in which Isaac does play an active part. Like his father before him, he experiences famine and goes to the Philistine king, another Abimelech, for possible help.  He also  pretends that his wife is his sister and, as happened to Abraham years before, is reproached but then offered royal protection for him and his family. And like his father before him, Isaac prospers, has problems with his neighbours over land and water, but manages to resolve them and to live in peace. All through these trials, he is true to God, and God blesses him. Finally, despite having been fooled by his younger son and his own wife, Isaac blesses Jacob again, this time freely, and sends him to Padan Aram to seek a wife from his uncle Laban’s family.

It is with Jacob’s journey to his uncle’s house that Vayetze begins. Early on in the journey, he has the first of his great dreams, that of the angels descending from and ascending to heaven, and God blesses him and, through him, us and, through us, all the families of the earth. What a blessing and what a responsibility are carried in a few lines. Jacob reaches his uncle’s house, meets his uncle’s two daughters and falls in love with Rachel and not with Leah, from which much will flow, but this is enough for now. The best way to read and hear more is to come this Shabbat to the service which will take place from 10.30. Adam Feldman will lead and enlighten us.

On Sunday 17th May, there will be a South West ‘simcha’ in Totnes, featuring Israeli dance and song, Jewish music and stories, jokes and food. You can find out more in the Events section.

Tuesday 27 January was Holocaust Memorial Day and there were events throughout the UK to remember those  those who suffered and died under Nazis persecution. This year, seventy special commemorative candles designed by Sir Anish Kappor to mark the seventy years since the liberation of Auschwitz were lit all over the UK, including one in Bodmin. The event in Bodmin was just one of many which took place in the Duchy.

Cornish Christian, civic and Jewish groups made an active effort this year to support and remember those who died in the Holocaust. A number of events before and on the 27th of January were held in Hayle, Redruth, Newquay, Truro and Penponds for the greater community, with active participation from members of Kehillat Kernow.

An afternoon service on the 27th was held at Redruth Baptist Church by local Christian congregants, followed by a film about Corrie Ten Bloom, a Dutch survivor of Ravensbrook Concentration Camp, who, before she was arrested, saved many Jews from the Nazis by hiding them in her house, until she was betrayed by a fellow countryman who pretended to need her help to save his wife. She was very much supported  in all she did by her father and beloved sister,  the former who died from shock a few days after arrest, the latter who died in Ravensbrook.  She spent the rest of her life after the war setting up a rehabilitation centre and speaking to groups across 60 countries about the Shoah and the need for reconciliation. This event was organised by Gillian and Michael Saldivar. Kehillat Kernow members, Harvey Kurzfield and Jeremy Jacobson attended.

On the 24th, a second event at Hayle Methodist Church, held by another Christian group who are loyal supporters of Israel, featured a film about the the aftermath of the European Shoah and explored the plight of Middle Eastern Jews who had been in North Africa and the Gulf area for 2,500 years, and were systematically expelled from their countries with the emergence of the state of Israel.  Members of Kehillat Kernow, Leslie and Pat Lipert, said prayers and Kaddish after the film.

On the 27th and 30th of January, Interactive Days of activities sponsored by the Devon and Cornwall Police, Cornwall Council and partner agencies, were held in Newquay and Truro and were  attended by KK member David Hampshire.

A Kehillat Kernow memorial service was held at Harvey and Jacqueline Kurzfield’s home in Penponds at 7pm on the 27th for the Jewish community to remember all those lost in the Holocaust.  This tradition of remembering and honouring those who died during the Shoah was begun several years ago by Louise Garcia who created the remembrance service and has carried on after her departure. 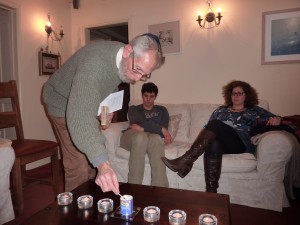 Harvey Kurzfield, Chairman of KK, led the service of remembrance. Members of our community attended. Along with traditional prayers and specific readings, candles were lit for the six million Jews who lost their lives in the Shoah.  Members of the community read several passages written by those who bore witness to those times of inexorable cruelty. A discussion followed which highlighted the need for continued education through the ages to all future generations and the importance of not only remembering but also acting to ensure that awareness of genocides cannot be ignored and never should be tolerated.